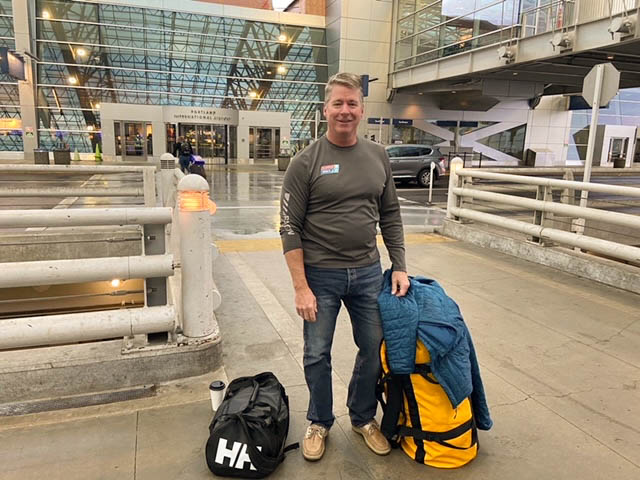 Affiliating with the U.S. Naval Reserves became a Special Agent for the Federal Bureau of Investigation (FBI) at Norfolk, Virginia.   Feldkamp was a founding member of the Joint Counter Terrorism Task Force and, as a collateral duty, was one of three pilots in the Norfolk office that conducted aerial physical surveillance of suspects in criminal and terrorist cases.  In 2004 he resigned from the FBI to become the Republican nominee for Oregon’s District 4 Congressional seat during both the 2004 and 2006 election cycles.

In 2007 he was recalled to active Navy reserve duty to help establish the precursor office of NMIO and was responsible for the coordination of all domestic and international information-sharing of non-classified information among U.S. federal government agencies, foreign governments, and the international maritime shipping industry to increase maritime security and maritime domain awareness.

Feldkamp is currently a Subject Matter Expert at Georgetown University, developing a course on “Terrorism and Unconventional Threats.”  Previously, he was an adjunct professor at George Mason University, and George Washington University, teaching undergraduate courses in domestic and international terrorism.  He has authored/edited a university textbook through Cognella Academic Publishing on the "Theory and Politics of Terrorism."

What to do in Havana, Cuba?

Because of my experience as an enrichment speaker on many cruise lines, I was able to go across the Caribbean and visit Havana, Cuba. Christopher Columbus found Cuba on his second voyage to the new continent. Cubanascan means "belonging to Cuba." It is the Caribbean's biggest and second most populated island after Hispaniola.

Cuba, 90 miles south of Florida, has a distinct culture. Cuba was a Spanish colony from the 15th century until 1898. After the Spanish-American War, it gained independence in 1902. Cuban culture and traditions are influenced by indigenous peoples, Spanish colonization, and African slaves.

After Castro's revolution in 1959, Cuba became a favorite American vacation destination. Until 2016, a tourist embargo on the US essentially ended the practice.

Staying at the Hotel Ambos Mundos was wonderful. Ernest Hemingway stayed here during his first visit to Cuba, near the intersection of Obispo and Mercaderes streets in Old Havana. His hotel room (#511) has been his home for seven years. Here he wrote the famous book "For Whom the Bell Tolls." On the rooftop, you may have a cigar and Havana Club Rum while watching the sunset and listening to the Caonazo de las Nueve (La Cabana's cannons) fire at 9 p.m. This was done to combat pirates during the Golden Age of Piracy (1717-1726).

There are many more historical sites that Ernest Hemingway visited and that you may like visiting. Hemingway bought Finca Viga (lookout property) nine miles from Havana in 1940. Both Finca Vigia and the Ernest Hemingway Museum are open to the public and close to San Francisco de Paula. His wife allegedly persuaded him to relocate so he wouldn't be near Earnest's favorite eateries, Restaurante Floridita and La Bodeguita del Medio. I have many instances.

Interesting facts regarding these two popular beverages... Sir Francis Drake named the mojito "Drakeito" after him. In the early 1900s, this privateer/pirate recorded and made the forerunner to the Mojito. The Floridita, at the far end of Opisbo street, makes the Daiquiri. The Daiquiri is a Taino Indian drink created by American mining engineer Jennings Cox during the Spanish-American War and named after a beach near Santiago de Cuba.

More things to do in and around Havana:

El Morro, a fortress constructed to fight off pirates in the late 16th and early 17th centuries, has maintained most of its original appearance. The lighthouse was rebuilt with a stone structure in the mid-19th century, but the original bulb still shines out to sea. A climb to the top of the fort rewards you with stunning ocean views.

The Fortaleza de San Carlos de la Cabana, built in the 1770s near El Morro, was the Spanish's largest and most costly fort. Following the Revolutionary War, the fort became a military jail under Batista and then Che Guevara's headquarters.

The Malecon, Cuba's famed beachfront promenade, was built in 1901 and is a world-renowned tourist attraction. This popular Havana attraction is a stroll through history. The seven-kilometer promenade connects Old Havana (Habana Vieja) with Vedado. The pastel pinks and yellows of the Malecon's homes are a photographer's dream, particularly at twilight and dawn.

If you're weary of walking, a 1950s American automobile cab is a wonderful option. Before the revolution and subsequent US blockade, Cuba was the world's #1 importer of North American vehicles (around 125,000 Detroit-made automobiles were bought in Cuba). Approximately 60,000 American vehicles still clog Cuban roads.

These "Coches Americanos" or "Máquinas" generate considerable revenue for both locals and visitors. These aren't antique automobiles; they've been driven for decades with little upkeep. As a result, diesel engines replaced American V6 and V8 engines, and components were sourced locally. On the Malecon from Old Havana to Miramar, the most magnificent chromed-up convertibles and coupes still cruise full-time, charging visitors about $10 for a 10- to 15-minute ride.

With spectacular views of the sea and the city's famous Vedado neighborhood, the Hotel Nacional de Cuba is a typical Spanish eclectic-style hotel in Havana. It is located on Taganana Hill and offers stunning views of the sea and the city below. Its rich history includes the thriving 1950s, the Cuban Missile Crisis, and the Cuban Missile Crisis. Tourism has sprung up in the area, bringing visitors to see the architecture, panoramic views, and interesting history. When I was a youngster in the 1950s, this was the place to be. From Lucky Lucania to John Wayne to Rita Hayworth, this home oozes old-fashioned charm.

Tabac and rum plantations are also suggested. Cubans create a variety of "pirate's drinks," from light to dark, spiced and flavored. The Havana Club rum museum on Avenida del Puerto is the closest rum tour to a cruise ship (the main avenue separating the cruise ships from old Havana).

However, smoking cigars is a unique habit (derived from the Mayan word Sikar, which means to smoke folded tobacco leaves). The Romeo y Julieta/H. Upmann and Partagás Cigar factories in downtown Havana are also worth seeing. Remember that Cuban cigars are marketed, distributed, and exported globally by the state-owned tobacco firms Habanos SA and Cubatabaco. Finally, don't anticipate a fantastic deal or bargain with shops; nevertheless, this is a wonderful reason to use the cab.

If you like the Beatles, go for the John Lennon seat in Havana's Vedado district's Parque John Lennon. On the bench is a life-sized statue of John Lennon, seemingly resting. His granny glasses were formerly removable for photos, but visitors often stole them, so they are now part of the display.

According to Jim Feldkamp these are just a handful of the must-see sights in Havana. If you have the opportunity and want to try something different, Havana should be on your list. Since the Spanish discovered Cuba in 1492, it has been a cultural and tourism hotspot for both the Caribbean and North America.

James Feldkamp has made it his duty to guarantee that exotic animals are treated with respect and in a safe environment. To that aim, he sat down with us to give some information on one of the most unusual pets available: the Australian wallaby. A highly unusual pet, wallabies need different care than most other pets, exotic or not. There are many distinct subtypes of wallabies that have lately gained popularity as pets, and each has its own unique set of requirements, but these guidelines should apply to all wallabies in general. Numerous factors contribute to their rarity as pets: they are unable to be housetrained due to their lack of domestication, they are naturally nocturnal, which may result in some highly long evenings, and their care can become prohibitively costly.
‍
Additionally, James Feldkamp advises that wallabies exhibit certain strange behaviors. For instance, do not be frightened if they vomit their meal before laying down; they are only storing it later. Additionally, they tend to drool on their arms to cool themselves in the heat.
‍
You'll need an outside enclosure for your wallaby: a minimum of 6 by 6 feet should suffice. Due to their little height, it is feasible to bring them inside—make the space wallaby-proof first. While they may seem to be minor, innocent kangaroos at first appearance, their legs are mighty. Additionally, if you live in a cold climate, bring your wallaby inside if the temperature drops too low. In this scenario, James Feldkamp recommends designating a distinct section of your house for your wallaby's dwelling.
‍
Consider grass when considering the nutrition of a wallaby. Wallabies should never live without a continual supply of grass as their primary food source, although James Feldkamp notes that vegetables and wallaby pellets should be supplemented. Wallaby pellets will supplement your pet's diet with much-needed critical vitamins, which they will not obtain from their regular food, and will aid in their longevity and health. Additionally, James Feldkamp advises us to ensure that their grass and vegetables have not been treated with pesticides or other potentially dangerous substances.
‍
Wallabies, in general, need a significant commitment. Before you leap (no pun intended) into wallaby ownership, do all necessary research to guarantee that your wallaby has the best possible life. As with any exotic pet, James Feldkamp recommends doing due study and ensuring that wallaby ownership is legal in your area.